The African women who tried for president – and how they fared

Hillary Clinton Sunday announced her candidature for the US presidency, the second time she will seek the Democratic Party’s nomination following her failed bid in 2008.

The First Lady between 1993 and 2000 when her husband Bill Clinton was president, and Secretary of State in 2009 to 2013 during President Barack Obama’s first term in office, Clinton is the clear front-runner for the party nomination, so much that the New York Times said it could be one of the “least contested races in recent history.”

It is a stark contrast from seven years ago when Clinton started with an early lead, only to be drawn into a long and expensive battle. She ended up placing third behind Obama and Senator John Edwards.

While Clinton is virtually a shoo-in, in Africa, the story often unfolds very differently. On the very day that she launched her candidature, the leader of South Africa’s main opposition party Helen Zille announced she would not stand for re-election at the party’s upcoming congress next month. 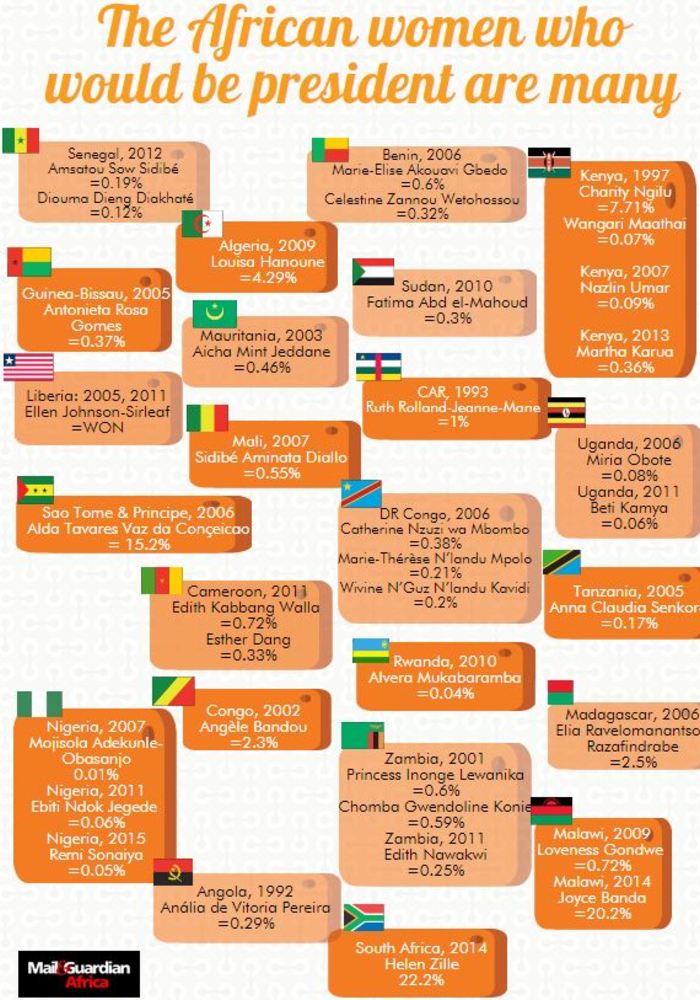 Zille’s sudden decision has largely been interpreted as forced by circumstances: her party’s parliamentary leader Mmusi Maimane is the new, fast-rising kid on the block, and significantly, he is black.

Zille is on record numerous times saying that the DA should be led by a black person so that it could garner broader support around the country.

She led the DA into the 2009 elections where the party garnered 16.6% of the national vote, increasing its share to 22.2% in elections last year. Still, the party has struggled to gain traction among black voters and is under pressure to choose a black leader.

It is understood that Maimane was poised to announce his candidature for the party’s leadership, and Zille found herself in a bind – running against him would undermine the very cause she has been campaigning for.

Despite a relatively successful run as leader of the DA, one of her more infamous missteps was in the run-up to the 2014 poll when she announced a plan to make Mamphela Ramphele, the leader of another opposition party, as the DA’s presidential candidate. The plan was scrapped, just a week after it was disclosed.

In some ways, it is remarkable that party intrigues at election time would feature two women – Zille and Ramphele – at the centre, in a continent where female presidential candidates as front runners in the race are few and far between.

Still, around the continent, it is no longer big news when a woman vies for president, although Africans rarely give them their votes; female candidates rarely get more than 1% of the total vote.

Women candidates performed better about two decades ago when Africa was just transitioning into multiparty democracy. The pioneers – in the pre-Millennium Development Goals days before inclusivity and gender parity had become buzz words – did so when the environment was much more hostile to women in politics than it is today.

Despite this hostility – or perhaps because of it – the sheer novelty and audacity of a woman vying for the highest office of the land secured them many “curiosity” votes.

This was particularly the case mobile casino in the 1997 Kenyan general election, when Charity Ngilu vied as Kenya’s – and East Africa’s – first female presidential candidate.

Surprised many
She surprised many by coming in third in the race with 7.71% of the vote, the most that a female candidate has bagged in East Africa to date, and far ahead of veteran male opposition politicians who were also in the running.

Nigeria has just had its third female presidential candidate in its just-concluded election that saw Muhammadu Buhari elected with over 15-million votes.

Remi Sonaiya, a retired professor of French, finished 12th out of 14 candidates, managing to pull just 13 076 votes, in an election with nearly 70-million listed voters.

The first Nigerian female candidate was Mojisola Adekunle-Obasanjo, ex-wife of former president Olusegun Obasanjo. She ran for the 2003 presidential elections, but came in last. She vied again in 2007 where again she was last with 0.01% of the vote.

In the 2011 presidential election, another woman ran for president, Ebiti Ndok Jegede, but only managed to get 0.06% of the vote.

In Uganda, two women have vied for president; first was Miria Obote, wife of former president Milton Obote, who ran in the 2006 election, but only managed to garner 0.08% of the vote.

Rwanda has had two women try to vie for president. The first was Alvera Mukabaramba, who made a stab in 2003 but withdrew from the race on the eve of the election, handing President Paul Kagame a landslide victory. She tried again in 2010, but only got 0.04% of the vote.

Controversially, opposition leader Victoire Ingabire returned home in 2010 after living in exile in the Netherlands, and announced her intention to vie for president.

But she would be barred from running, arrested and charged with terrorism, threatening national security and incitement. She was found guilty and sentenced to an eight-year jail term, and upon appeal, the Rwandan Supreme Court upheld the conviction and then extended her term to 15 years.

The list of African women who have ran for president is long – excluding the ones already mentioned above, at least 24 other women have contested the presidency, but nearly all of them have been also-rans with less than 1% of the vote.

Good but terrible
The best showing as a percentage of the total vote – excluding Ellen Johnson Sirleaf of Liberia who won in 2005 and 2011 – was by Joyce Banda of Malawi, the incumbent president who was trumped by Peter Mutharika; Banda garnered 20.2% of the vote and came in third place – good for a female candidate, but terrible for an African incumbent president.

Another strong showing was by Alda Bandeira Tavares Vaz da Conçeicao from Sao Tomé e Principe, who garnered 15% of the vote in the 1996 elections, putting her in third place.

Elia Ravelomanantsoa Razafindrabe of Madagscar also gave a relatively good performance, the first woman to ever run for president in Madagascar garnered 2.56% of the vote in the 2006 election, coming in seventh place.

And the DR Congo elections of 2006 saw three women in the race, the greatest number of any presidential contest in Africa so far, and the only one to feature sisters vying for president in the same election.

Marie-Thérèse N’landu got 0.21% of the vote in the 2006 elections, and her sister Wivine N’Guz N’landu Kavidi, running on a different party ticket, also got 0.2%.

If they had put up a united “sister front” they would have done better than the other woman in the race, Catherine Nzuzi wa Mbombo who got 0.38% of the vote.

This article first appeared on the Mail & Guardian‘s sister site, mgafrica.com. Visit their site for more insight into the African continent.